Observations by Jeff Wadley during a recent prison run: 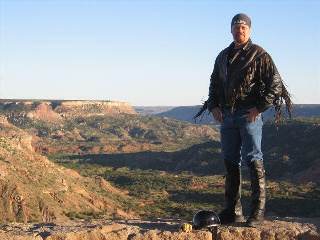 One particularyoung man I visited with started to leave and go back into the prisonfrom the yard when the invitation began; I reached out and shook hishand and stopped him.

I asked him, “Do you have a spiritual belief?”, his reply was, “ sort of”.
Then I asked him,” If your sister, wife, brother or whomever picked youup the day of your release and on your way home you were hit by a truckand killed, and found yourself standing in front of Jesus and He saidto you, “ Why should I let you into my heaven?, What would you say?.
His reply was,” I don’t think I would get that far.”
I also asked him,” Would you like to know the truth?” and then, I explained this scenario;

Did you know that everything in your life up to this point had tohappen JUST RIGHT, in order for you and I to meet on this prison yardand shake hands? Every molecule, every good and bad thing, everythought, every action, had to be just right in your and my life inorder for us to meet!
His response was one of shock. Just to realize I was right.

I asked him if I could share something with him? And his response was,” I wasn?t even going to come out and see the activities today, I wasgoing to stay inside and read, but something told me to come on out. Itold him that was Jesus knocking at his spiritual door.
After sharing God’s love and the scriptures from John 3:16 and manyothers this young man named, “Tron”, accepted the Lord as his personalLord and Savior. Please remain in prayer for him as he is struggling toovercome a sexual addiction. I prayed that God would intervene themoment he is faced with his adversary in sin, and that he couldovercome this addiction by serving God.
In tears he gave me a manly hug and had to go inside for “Count”.
Lord, bless ?Tron?. Be with him in everything he does. Be by his sideand comfort him. Allow your word to come to life for him as he reads.You promised the comforter, and I ask you send him to “Tron” inwholeness. Amen

Hope Fellowship Riders ride for Christ. This is their calling andobligation to the Lord. They use their bikes to get the Word across tothe lost. God is doing great things through these men and women. What’s your story?